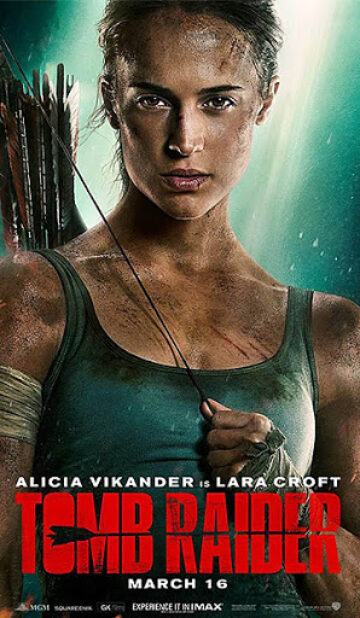 Lara Croft is the fiercely independent daughter of an eccentric adventurer who vanished years earlier. Hoping to solve the mystery of her father’s disappearance, Croft embarks on a perilous journey to his last-known destination — a fabled tomb on a mythical island that might be somewhere off the coast of Japan. The stakes couldn’t be higher as Lara must rely on her sharp mind, blind faith and stubborn spirit to venture into the unknown.

I have always been astounded by the general response to movie adaptations based on video games and it all boils down to the dreaded VIDEO GAME MOVIE CURSE! OK, there is no denying that some if not most adaptations miss-handle their source material and piss off a lot of fans such as Super Mario Bros., DOOM, Alone in the Dark, and Resident Evil but to say all films based on video games are bad is a little extreme.  Now and again we receive a movie worthy of its gaming counterpart, such as Assassins Creed, Pokémon Detective Pikachu, and of course, Tomb Raider!

What should you expect from a Tomb Raider movie? A good story, exhilarating action and stunts, exotic locations, puzzles, TOMBS, and a badass heroine, well this movie ticks all the boxes. This movie merges the light-hearted fun aspect from the Angelina Jolie/Lara Croft era and updates it with a grittier and more realistic take on the character.

This is an origin movie; the movie succeeds with laying the groundwork for Lara’s character arc and ends on a great cliffhanger whilst adding fan-service.  The ending leaves the audience wanting the next chapter and my fear was due to the lukewarm reception from critics, Warner Bros would be reluctant to push forward with a sequel, however, I was pleased to learn a sequel is currently in the early stages of pre-production.

Alicia Vikander absolutely steals the show and fits perfectly into the role of Lara Croft, she came out on top after beating stars such as Emilia Clarke and Saoirse Ronan. She was the best choice for the role, her passion and determination was so apparent throughout the movie and she manages to make Lara feel three dimensional. She’s playful yet vulnerable, brave but still frightened in times of peril, she reacts, learns, struggles, and overcomes obstacles.

Lara Croft is one of, if not the most recognizable lead female video game character who is massively transferable onto the big screen experience. In this day and age, we are starting to get more female lead blockbusters and in my opinion, Vikander’s take on Lara Croft could be one of the greats pinning her alongside other strong characters such as Sarah Connor, Ellen Ripley, and Carol Danvers.

The movie’s antagonist Mathias Vogel is played brilliantly by Walton Goggins, his character feels grounded but also unstable and cruel.  Vogel is leading an expedition on a mysterious island to locate a hidden tomb and has been searching for 7 years, this time has made him desperate and that makes him more dangerous.

The choreography in Tomb Raider uses real performers and props as much as possible, Vikander has even stated that she performed most of her stunts. In one impressive sequence, Croft (Alicia Vikander) is being swept away by a dangerous current towards a waterfall and manages to grab onto a wing of an old plane. This scene was created with a mixture of on-location filming and CGI, this is just one of many exciting moments throughout the movie which has you on the edge of your seat.

Tomb Raider captures the exciting elements from the games by including riddles, puzzles and action, however, you do not need to have played the games to enjoy the movie.   Adventure movies are always entertaining, and Tomb Raider is no exception, there is a great story, interesting characters, suspense, mystery, and beautiful cinematography.

In my opinion, Tomb Raider was a great start to what I hope will be the first movie of many to come.  I will be lining up to watch the sequel as I am now fully invested in the character and her quest.