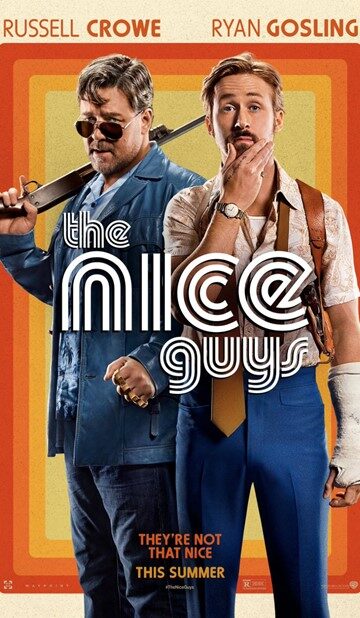 Holland March (Ryan Gosling) is a down-on-his-luck private eye in 1977 Los Angeles. Jackson Healy (Russell Crowe) is a hired enforcer who hurts people for a living. Fate turns them into unlikely partners after a young woman named Amelia (Margaret Qualley) mysteriously disappears. Healy and March soon learn the hard way that some dangerous people are also looking for Amelia. Their investigation takes them to dark places as anyone else who gets involved in the case seems to wind up dead.

The Nice Guys is such a quality pleasure movie for many reasons. Frustratingly the movie received a poor commercial performance which makes it unlikely that a sequel will ever get made despite the fact Shane Black has expressed interest on many occasions and has stated he would make a sequel “in a heartbeat”, here’s hoping a studio will see sense at the potential this has to be a franchise. Whether you’re in the mood for a hysterical comedy, a well-paced action or a gritty crime noir this movie ticks all the boxes. Shane Black once again proves his ability to create fun and original buddy cop movies having already given us gems such as Lethal Weapon and Kiss Kiss Bang Bang.

The cast does a terrific job and you can tell they had fun making this movie which is enthralling to the audience. Ryan Gosling and Russell Crowes chemistry is undeniably strong and they bounce off each other’s opposite personalities. Gosling plays a witty, down on his luck and alcoholic P.I which contrasts with Crowes no fuss, straight to the point muscle for hire. It’s great to see both actors delve into a genre that is out of their safety nets, particularly Russell Crowe who is better known for serious roles.

Angourie Rice stands on par alongside Gosling and Crowe making The Nice Guys feel like a trio, stealing almost every scene she is in amongst the A-list actors. Playing Gosling’s daughter Holly, she brings some balance to the craziness of the other characters and in the end plays a pivotal role in solving the case. The villains of the movie felt slightly underdeveloped however Matt Bomer and Kim Basinger still do a good job with the material they were given.

The Los Angeles 70’s setting was a great era to explore, a lot of time was clearly spent on creating the right tone and feel for the city of angels. The colourful L.A skyline, the Hollywood sign, political activism and 70’s fashion throws the audience into the culture. Smaller details can be seen throughout the movie which is subtle but adds believability from things such as the Jaws 2 poster, Star Wars being shown and a Tower Records store.

The Nice Guys has a modern edge with a retro feel, the colour palette for the movie was bright and vibrant which really sets the mood for the 70’s setting, this was used in the movie and also its marketing with Warner bro’s releasing a 70’s-style trailer. The soundtrack was impressive using a mixture of 70’s disco music like Boogie Wonderland but also a classy instrumental music score.

One of the biggest triumphs in The Nice Guys is Shane Black’s writing. The slapstick comedy and one-liners are on point and never feel flat, there is one scene in particular where Ryan Gosling literally falls into evidence and his reaction will have you in stitches!

Overall The Nice Guys is a fun ride with witty dialogue, explosive action set pieces and a perfect comedy duo that creates nostalgia reminding us how good Buddy-Cop movies are. The film starts with a car flying through the air which sets up the movie perfectly and The Nice Guys does not disappoint.