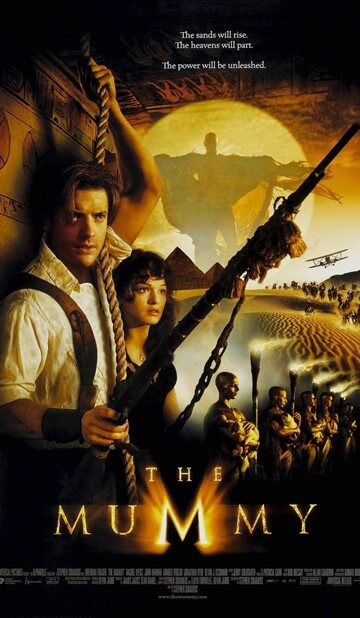 At an archaeological dig in the ancient city of Hamunaptra, an American serving in the French Foreign Legion accidentally awakens a mummy who begins to wreak havoc as he searches for the reincarnation of his long-lost love.

1999’s The Mummy is the perfect blend between adventure and horror.

Based on the classic Universal monster, the story revamps the 1932 original and brings the iconic character back to the screen in an exciting way. It lowers the ‘horror’ aspect yet still includes frightening moments.
This film also adds a comedic script, explosive action, education (if ancient Egypt interests you) and memorable characters.

In my opinion, the product design is one of the movies biggest strengths. Allan Cameron, whose other film credits include The Da Vinci Code and Van Helsing, does an incredible job at creating the barren dessert, the tombs, the fictional city of Hamunaptra and Egypt’s capital city of Cairo. Egypt has such an interesting culture and landscape, and it’s captured superbly by its impressive set design and imagery.

Personally, I don’t believe a movie like this works in the modern age, mostly because the un-dead monster and his minions do not seem as intimidating in a time when we have access to advanced technology and weaponry. The 1920’s was a great era to set this movie in, the outfits gave a swashbuckling feel to its characters, swords seemed just as effective as guns to defeat the enemies and the classic vehicles such as the Stampe aircraft and the Humber 16/50 car gave the movie an old-timey charm. Let’s face it, if this movie was set in this day in and age, all the characters would be driving quad-bikes through the desert to evade danger instead of racing camels and where is the fun in that?

I heard a rumour that Leonardo DiCaprio was in the running to play Rick O’Connell and even asked to put filming of Danny Boyle’s ‘The Beach’ on hold. Thankfully this did not happen, as clearly the role was made for Brendan Fraser. At the time, Brendan Fraser would have seemed like a strange choice to cast in the lead role, however he brought so much charisma and clumsiness to the character, it made him all the more interesting to watch.

What this movie gets right in comparison to its sequels and reboot, is understanding that it’s a monster movie. When Imhotep is brought back to life, he is a force to be reckoned with and is scary as hell. One particular scene that stands out is when Tuc Watkins character who is visually impaired loses his glasses and is left alone in the dark hallways of the tomb, being hunted by the mummy, I would not want to be in his shoes!

This scene plays out through his eyes, the blurred lens, dim lighting and eerie sounds gives the audience a sense of dread, and it makes you feel as if the creature is creeping up behind you. The movies that follow lean too heavily on the adventure tropes and in doing so, loses an element that made this movie so great.

A narrative which I felt should have been explored more was the plagues of Egypt. Up until the 3rd act, Imhotep had been set up to bring death and destruction to the world if ever resurrected, however the plagues seemed rushed and incidental. I understand they needed to move the story along so they could wrap things up, but surely they could have used the plagues as a challenge to the main characters?

Overall, 1999’s The Mummy was a fun movie and one I often buy some popcorn to sit down and re-watch. The cast was decent, story was enjoyable and the CGI was good for its time.