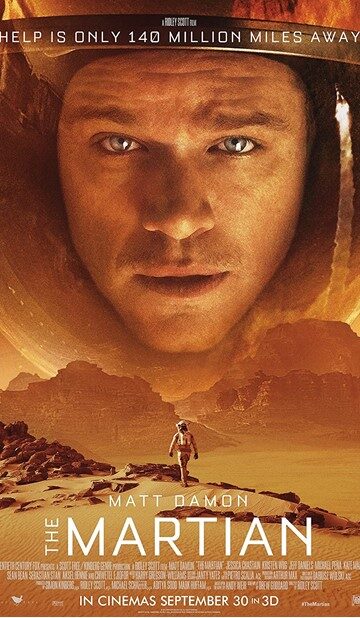 When astronauts blast off from the planet Mars, they leave behind Mark Watney (Matt Damon), presumed dead after a fierce storm. With only a limited amount of supplies, the stranded visitor must utilize his wits and spirit to find a way to survive on the hostile planet. Meanwhile, back on Earth, members of NASA and a team of international scientists work tirelessly to bring him home, while his crew mates hatch their own plan for a daring rescue mission.

Finally, Ridley Scott returns to the Sci-Fi genre on top form and in my opinion the best work he has done in years following the disappointing reception of Exodus and The Counsellor, this proves why Scott should leave the Alien franchise alone and make more new and original movies as throughout his career he has provided us with instant classics.

The Martian is based on the novel of the same name by Andy Weir which is a powerful, visually stunning and all out fun movie to watch.  The imagery and sets are beautiful with the wide shots of Mars’s landscape and dust devils, the CGI looks incredible, the soundtrack is ominous, mysterious and really does bring you into the outer worldly experience. The screenplay comes across very natural with its comedic outbursts which lead the film to go on and win a Golden Globe award for best motion picture under the category ‘Comedy or Musical’.  Its brilliantly paced and keeps the audience engrossed right through to the exciting climax.

The talent in this movie is huge and everyone seems to be enjoying themselves with their roles. The team of astronauts (Chastain, Peña, Stan, Mara, Hennie) work so well together and seem like a family while the NASA employees (Ejiofor, Daniels, Wiig, Bean, Park, Wong) bounce of each other as they have disagreements throughout the events of the movie.

Although the supporting characters do get their moments, it’s Matt Damon who stands out from the crowd as astronaut Mark Watney, as at times The Martian feels like a 1-man band and Damon does an amazing job at carrying you through this character’s story. The movie opens to unpredicted events which leaves this character stranded on Mars by himself and he brilliantly establishes the seriousness and gravity of his situation, now he must rely on his intelligence to stay alive and contact Earth.

Following the events which leaves Watney marooned we are presented with a very tense and graphic scene where he must use surgical tongs to remove a metal fragment from inside his abdomen before he bleeds to death. After perform surgery on himself, he sits back in his chair and says exactly what the entire audience is thinking… ‘Fuck’.

The thought of being left alone on an entire planet is chilling and this is clear from the sheer look of dread in Watney’s face.  What’s great about this movie is it has the perfect balance of humour, excitement and shock value.  Instead of becoming just another explosive disaster movie, The Martian does something unexpected, as after realising his situation he tells the audience “I’m not going to die”.

That high-spirited determination is used throughout the entire movie as he uses his skills as a botanist to grow his own food on Mars, he records log entries to narrate his challenges and achievements and keeps a charming and witty attitude which really gets the audience routing for him.  Another great aspect about The Martian is the realism, not just with the science jargon but politics, the media and the NASA equipment used by Watney to contact Earth is a replica of a spacecraft launched by NASA in 1996 (The Pathfinder), the filmmakers consulted with engineers at NASA’s Jet Propulsion Laboratory (JPL) before recreating the probe for the film.

Of course, with any Sci-Fi movie something had to go wrong and after a breech causes an explosion and destroys Watney’s crops, the movie turns into a race against time rescue mission that keeps you on the edge of your seat right up until the credits start rolling.   Watney is such a likable character, you become so committed to the success of his survival and the ending of The Martian is a true nail biter.

The soundtrack also makes this film stand out as I think the music was very well selected with hits such as ‘Life on Mars’ and ‘Starman’. I found my feet tapping away at many moments due to some classics that were also used throughout the film which included ‘Waterloo’, ‘Love Train’, ‘Mr blue Sky’ and many more. The music can sometimes make or break a movie but in this films case, I think they hit the nail on the head.

With the seriousness of previous Sci-Fi movies such as Interstellar and Gravity, The Martian was a pleasing surprise being such a fun, heart-warming, captivating and entertaining story, this is a great movie and an absolute must see!