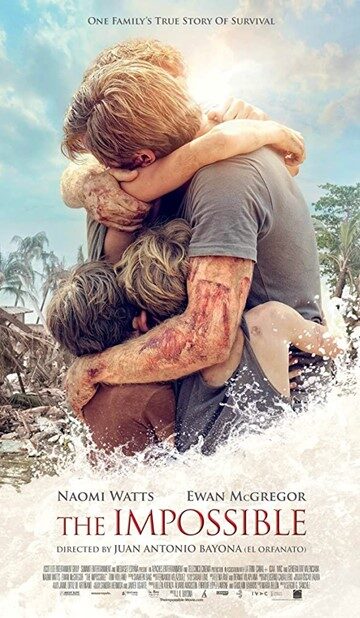 The story of a tourist family in Thailand caught in the destruction and chaotic aftermath of the 2004 Indian Ocean tsunami.

In preparation to watching The Impossible, I recommend you grab some tissues, a pillow and hug the closet person to you, as this is an emotional rollercoaster!

Just knowing the events playing out on screen actually happened made me feel jittery, the movie opens with a black screen and the rising piercing sound of a jet turbine because that’s how Maria Belón (actual survivor who Naomi Watt’s portrays in the movie) described the sound of the Tsunami. The moment the movie started I felt my heart beating faster. This movie is tense, nerve-racking and more effective than most horror movies I’ve seen!

I have always been a huge fan of movies based on true events and even more so when I hear real survivors or family members praise the movie for its accuracy. The family on which the story is based were on location in Thailand during shooting to provide tips and guidance to the cast and crew to ensure they capture the true terror and strength that the family, tourists and locals endured when the waves struck in 2004.

Creating the Tsunami for the movie was an incredible piece of filmmaking. The planning process for this sequence took a year and the end results look so realistic, at times I needed to remind myself I was watching a movie. This was achieved by creating a 1:3 scale model of the Orchid Beach Resort including the bungalows, the pool and even palm trees, the miniature set was then doused by a monstrous wave to simulate the destruction.

Director J.A. Bayona decided early on to use practical effects in favour of CGI over concerns that CGI water would not look real. During filming, when the first wave hits, Tom Holland and Naomi Watts are caught in the ferocious current and this was filmed in a purpose built tank with the actors being pulled by a surge of water. The methods used by Bayona and visual effects supervisor Félix Berges made the whole sequence completely convincing.

Don’t go into The Impossible expecting a standard disaster movie, the bulk of its story is based on the family being separated and the lengths people will go to in order to protect and find their loved ones. The message delivered in The Impossible is what I enjoyed the most, the message of strength, unity and family. As documented in the movie, after the waves hit, the Thai locals who had just lost their homes went searching for survivors to provide aid and assistance to those in need and this proves that in time of peril, people are prepared to overcome the greatest odds.

There are many moments during The Impossible when I was teary-eyed and a scene that I believe is worth a mention is when Ewan McGregor must borrow someone’s phone and call his wife’s father to tell him of the situation. At this moment, McGregor’s character Henry is at his lowest due to the agony of being separated from his wife and children, not knowing whether he will see them again or if they are even alive. Yet this is also a moment of strength as after he succumbs to his fears, he then makes a promise to never stop looking until he finds them and at this moment, I felt like standing up and clapping! In my opinion, this is one of, if not the best performance Ewan McGregor has delivered in his career.

A key part to any movie and an element that’s often overlooked unless it’s deemed distracting, is the ‘extras’ that fill up scenes to make us believe locations or worlds are populated. Many of the extras in The Impossible were actual survivors of the tsunami and they all deserve recognition for their courage for being on a set which surely was reminiscent of the aftermath and hardship they all faced.

The Impossible is an astounding movie, moments throughout are difficult to watch but in the end,  this was an important story to tell and leaves the audience with a sense of triumph.