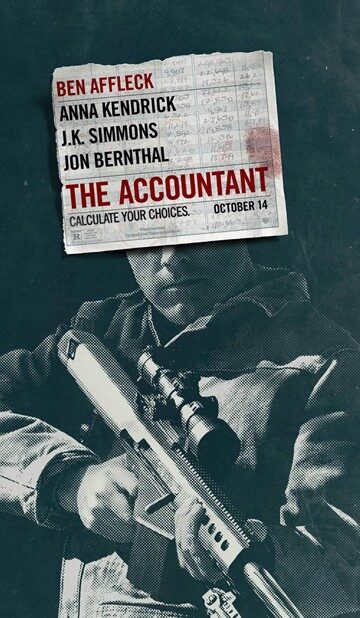 Christian Wolff (Ben Affleck) is a mathematics savant with more affinity for numbers than people. Using a small-town CPA office as a cover, he makes his living as a freelance accountant for dangerous criminal organizations. With a Treasury agent (J.K. Simmons) hot on his heels, Christian takes on a state-of-the-art robotics company as a legitimate client. As Wolff gets closer to the truth about a discrepancy that involves millions of dollars, the body count starts to rise.

Once again Gavin O’Connor provides movie goers with a stylish, diverse and character driven movie.  These days the industry is filled with cinematic universes, sequels and reboots, it’s rare to leave the cinema having just watched an original story.

One of the main aspects that made The Accountant such a joyous experience is that the marketing before the film’s release did not give any major plot details away.  The tense score that builds throughout the opening credits truly sets the tone for what’s to come and the mysterious first scene has you glued to the screen.  Ben Affleck completely shows off his acting capability playing the main protagonist Christian Wolff and in my opinion one of the best roles he has ever performed, the characteristics Affleck incorporates into the role are very believable and as you get lost into the story, you forget that you are watching an actor and not a man who suffers with autism.   However, the film does not take itself completely seriously as the awkward social interactions and one liners from Affleck make for most of the films natural comedic moments.  I found myself having an emotional connection to this character as the film delves into his life with a series of flash backs, showing the audience his and his younger brother Braxton’s tough upbringing from a military father.

Even through Affleck steals the show, the supporting cast do a terrific job with their characters, J.K Simmons playing a soon to be retired treasury agent determined to catch the accountant, Anna Kendrick playing a junior accountant for a tech firm taking inspiration and basing her character on her mother who is in fact a real-life accountant and Jon Bernthal playing a witty hitman for hire.  The second act is where the violent nature of the movie really kicks in and we are presented with well-choregraphed realistic action sequences, which makes The Accountant stand out from a lot of films in the same genre as it’s not just your typical shoot them up action blockbuster but instead a creative, intelligent and well-paced thriller.

However, all the praise should not just go to the director but also to the films writer, Bill Dubuque, who’s other writing credits include 2014’s The Judge starring Robert Downey Jr. I thoroughly enjoyed both films and so far, Dubuque has proven his ability to write character driven movies, I am excited to see what future projects he brings to the table and will eagerly watch new material written by him.

The only element to the story which I felt should have had more of an explanation was the fact that Christian Wolff was described as a freelance accountant who worked and uncooked the books for some of the world’s most dangerous criminal organizations.  The mystery was captivating; however, I would have enjoyed watching how he acted around such menacing clientele.

Overall the gripping story of The Accountant has you second guessing with plenty of twists and turns up until the final moments where every question raised in the movie was answered by its conclusion. Whether you could guess the surprises early on or not, all the loose ends are tied up and we are given a satisfying ending.

This film ticked a lot of boxes for me and one I highly recommend, you won’t be disappointed.