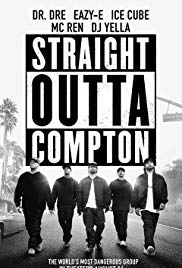 I believe I was fortunate enough to have not known the story of N.W.A prior to watching this movie. Going into the cinema with an open mind and no expectations really enhanced my experience, I found Straight Outta Compton sensational from the incredible acting, direction, script, music, and pacing. I am not sure how accurate the depictions are but it’s worth noting this is not a documentary and more a re-telling of the group’s rise to fame and the struggles they faced.

You can feel the passion from everyone involved in making this movie, particularly from Ice Cube and Dr. Dre (2 of the founding members of N.W.A) who were on set during filming. Ice Cube produced the film and his son O’Shea Jackson Jr. portrays his father. I’ve read that Dr. Dre did not want to be involved at first however after seeing a script and learning F. Gary Gray was directing, he changed his mind and that confidence shines through in this movie.

I feel that one of Straight outta Compton’s biggest accomplishments was introducing the music and the artists to a new generation. These stars are known globally but I doubt many people of the younger generation know how important the group was to the music industry. You don’t need to be a hip-hop or N.W.A fan to watch and understand this movie, the story itself is alluring and I remember walking out of the cinema and downloading many albums, I really paid attention to the lyrics now I had the awareness of their meaning.

The character development throughout the entire movie is absolutely incredible. The introductions and unfolding events are full of excitement and emotion and as audience members, we start to care about them and their journey. There was a risk of this movie being a generic music biopic but instead, it’s a well-executed drama which gives you a glimpse into what life must have been like for the band.

A compliment to the cast is that no one out-shines another as all of them embodied their characters and clearly done their research to deliver the best performance they could. Following the release of Straight Outta Compton, I have been excited to watch any other projects the actors have been in. Special mentions must be given to O’Shea Jackson Jr. who prepared for 2 years before being given the role of his father and Paul Giamatti who plays the groups manager.

The whole movie is full of stand-out scenes which leaves me struggling to pick out specific highlights. The recording of Boyz-In-The-Hood and the Straight Outta Compton album captured the group’s frustration and determination. The passing of Eazy-E was a difficult scene to watch and there was not a dry eye in the whole cinema as Jason Mitchell conveys so much fear in his final moments. The original cut of Straight Outta Compton was 3 hours and 30 minutes long and I would have happily sat through this runtime.

I cannot fault any part of this movie and I highly recommend to anyone, just writing this review makes we want to watch it again.