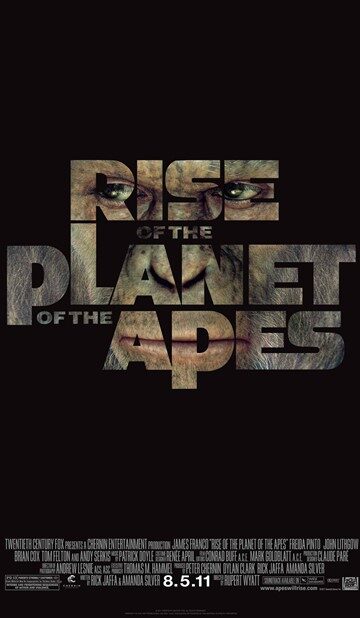 Rise of the Planet of the Apes

A substance designed to help the brain repair itself gives advanced intelligence to a chimpanzee who leads an ape uprising.

Rise of the Planet of the Apes is one of those movies where I went in with low expectations, expecting another version of the tired franchise which had declined in quality since the 1968 Charlton Heston original and was pretty much dead in the water following Tim Burton’s 2001 remake, but boy was I wrong!

This movie is so thought provoking, the opening scene of poachers capturing apes and shipping them off to laboratories in the US is one of many moments throughout the movie that will have you shaking your head in disgust over the cruelty these animals face. I guarantee you will be rooting for the ape uprising towards the climax.

This movie is a mixture of genres and therefore there is something for everyone to enjoy.  If you are a fan of drama’s, Rise of the Planet of the Apes is an emotional and character driven story. If you are looking for action, the movie is a slow burner but the battle in the final act is a very rewarding pay off. And if you are a Sci-Fi fan then fear not, as this is an ‘Apes’ movie and includes concepts of advanced science.

The CGI is one of the key elements which makes it stand tall amongst its predecessors, as modern technology allows us to step away from actors dressed like apes and instead utilize motion-capture to create lifelike animals without ruining the actor’s performance. It comes as no surprise that Andy Serkis was hired to play Caesar considering his experience playing Gollum in The Lord of the Rings movies and arguably the most famous ape in movie history, King Kong.

Caesar in my opinion is one of greatest movie characters in the past decade and he is the driving force for the reboots, I don’t believe these movies would have been as successful if Caesar was not so compelling.  We watch him grow from a baby Chimpanzee to a super intelligent primate and over the years he learns and evolves, he develops a moral compass which is tested to the breaking point.

There are many great scenes throughout Rise of the Planet of the Apes and it is sometimes difficult to write a review without discussing specific details, however, I would not be doing this movie justice if I did not mention the best scene which was completely awe-inspiring. When Caesar spoke for the first time, the entire cinema fell silent and I mean, you could not hear sweet bags or popcorn being rustled, there was just an eerie silence but at the same time an electric atmosphere. I will not mention any more, as I urge people to experience this moment for themselves.

As much as I love this movie, I think some of the human characters are the weakest points of the film as they feel generic and undeveloped however this is easily forgiven because everything else is so gratifying. The movie left me wanting more, and the end credits set the stage for a grander sequel.

Rise of the Planet of the Apes was a superb first entry to the rebooted franchise and brings a fresh and interesting new story for these “damn dirty apes”.