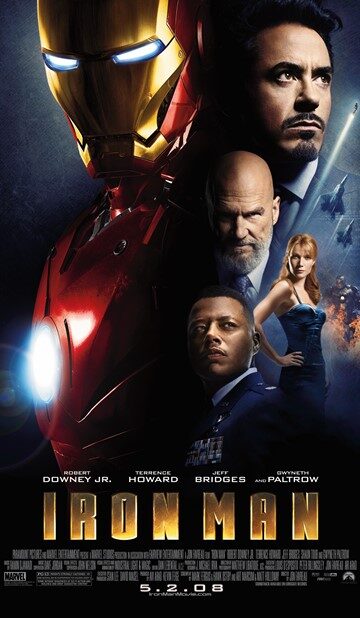 After being held captive in an Afghan cave, billionaire engineer Tony Stark creates a unique weaponized suit of armour to fight evil.

He is Iron Man!

I believe that Robert Downey Jr. was put on this earth to play Tony Stark, it’s one of those rare occasions where we couldn’t accept anybody else in the role and our minds cannot tell the difference between the actor and the character. And this is not to say that Downey Jr. is incapable of performing other roles proven by the rest of his filmography, but Downey Jr. fully embodies all of Starks characteristics and mannerisms that no other actor could have accomplished.

It was of course a huge gamble casting Downey Jr. as the lead considering his troubled past however, this is one of reasons Jon Favreau thought he was the ideal choice. His past mirrors Iron Man’s origins as it’s a story about battling your inner demons and learning from your mistakes, it’s a redemption story and in the end a hero emerges.

It wasn’t only the lead star that raised doubts but the whole movie was a risky choice for Marvel’s first self-funded venture that would ultimately turn into the MCU as we know and love today. Back in 2008 Iron Man was a relatively unknown Superhero in comparison to Spider-Man, Batman and Superman who held widespread success in their own movies and TV shows. However, Iron Man was an underdog and could have easily of gone by unnoticed but boy, did he triumph! The movie went on to earn over half a billion worldwide at the box office, setting the stage for the MCU and creating an A-list superhero in the process.

In a time when superhero movies were primarily known to be childish and campy (besides Chris Nolan’s take on Batman), Iron Man embraced the lighter tone but also included mature themes and dialogue making the movie an instant hit amongst movie-goers around the world. The feel of Iron Man would pave the way for the future Marvel movies by including a gripping story, interesting and relatable characters, great action and witty humour, Iron Man was not only an origin for the character but for the whole of the Marvel Cinematic Universe.

The films first act in Afghanistan sets a realistic style that felt relevant to our time however the film never takes itself too seriously and manages to strike a good balance between good storytelling and CGI superhero fun. The colour palette was also very clever, the first half of the movie felt very metallic and the second half felt glossy which matches Starks journey and the development of the Iron Man suits.

Special mention should be given to Gwyneth Paltrow who became a fan favourite playing the formidable Pepper Pots, Tony Starks’s assistant and future love interest however she is not just your typical damsel in distress. The rest of the supporting cast do a tremendous job with their roles even though Terrence Howard did not return to play Col. James Rhodes in later films. Jeff Bridges was a great choice for the villain and gave a menacing performance. Clark Gregg as Agent Coulson was another great addition whose role was originally much smaller but after having such great chemistry with all the other cast members, more scenes were added.

Instead of composing instrumental music like many big blockbusters do to build tension during action sequences, Iron Man’s soundtrack uses classic rock with bands such as AC/DC and Black Sabbath and the music merges perfectly with the feel of the whole movie.  Tony Stark is obsessed with building new and exciting weaponry and gadgets, and you can really picture Stark sat in his workshop tinkering with a new creation with this type of music blaring out.

Overall, Iron Man exceeded everyone’s expectations by being a fresh take on the genre, it was exciting, explosive and made a lesser known character an icon.