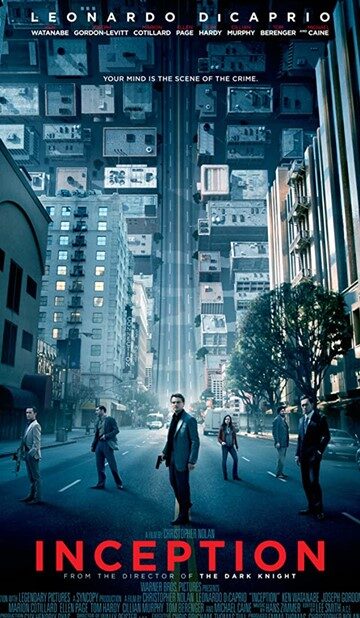 A thief who steals corporate secrets through the use of dream-sharing technology is given the inverse task of planting an idea into the mind of a C.E.O.

Director, writer, and producer Christopher Nolan is the greatest filmmaker of this generation, there I said it!

And why is he the greatest? Because every movie he creates is crafted to perfection, every scene has a purpose and no detail is placed into the worlds he builds by mistake. The fact that it took Christopher Nolan nearly eight years to write the screenplay for this movie is a testament to his ability and it comes as no surprise that 5 of Nolan’s movies dominates the top 50 best-ranked films on IMDB and of course one of those films is Inception.

Inception gave me such a stimulating cinema experience and that is a huge compliment to everyone involved in making this masterpiece. Nolan’s ability to create such an inventive, captivating and thought-provoking story, the cast playing such fascinating characters and each having an integral part to the narrative and Hans Zimmer’s tense and outer-worldly musical score all contribute to making Inception such an outstanding movie.

So much thought went into this film and every detail in the movie has a reason behind it, such as Ellen Page’s hair being in a bun during the hotel sequence. To the likes of me and you, it’s just hair in a bun but this was done on purpose to avoid any bloopers involving zero-gravity. As with all of Nolan’s films, there is always a sense of realism and this applies even to a movie which is set in people dreams. In spite of the surreal set pieces in the movie including the rotating hallway, the avalanche, and the never-ending staircase, these set pieces were created using mostly practical effects with CGI being kept to the bare minimum.

At just under 2 and a half hours long, Inception never feels stretched out or boring as the film continues to build momentum and is always setting itself up for its next stage which connects to the character’s journey throughout the course of the movie. That constant grasp with the audience has you on the edge of your seat and literally has you holding your breath up until the final moments of the movie which is fitting considering how the events of these moments play out.

The entire ensemble cast is spectacular and all bring their own unique personalities and skill sets, everyone has a purpose which is nice as it utilizes each character and no one feels out of place. Leonardo DiCaprio’s character arc is the most interesting though as his character has the most to lose and his parental instincts is the emotional hook for the movie. As the story progresses, DiCaprio’s actions become clearer and help unravel some of the biggest twists.

Inception is a movie which you need to pay close attention to, yet it never feels convoluted. There is a great piece of dialogue in the movie in which Joseph Gordon-Levitt is trying to explain the concept of Inception and the difficulties they face in layman’s terms to Ken Watanabe.

“Gordon-Levitt: If I say to you, don’t think about elephants what do you think about?”

The movie does not treat the audience like idiots however the story provides exposition so the audience is never lost. Inception is very much an intelligent heist movie but instead of stealing, the mission is to plant an idea in the mind of Cillian Murphy and the planning of the heist is just as interesting as the heist itself.

Even at the time of me writing this review (9 years after the film’s release) the ending of Inception is still discussed across social media platforms. I guarantee watching this movie amongst friends and family will spark a discussion on whether the team was successful or not and really, it’s down to your own interpretation. It’s no coincidence that the cliff-hanger ending truly makes you feel as if you have woken up from a dream which is quite remarkable, it’s movies like Inception that make me such a film fanatic.