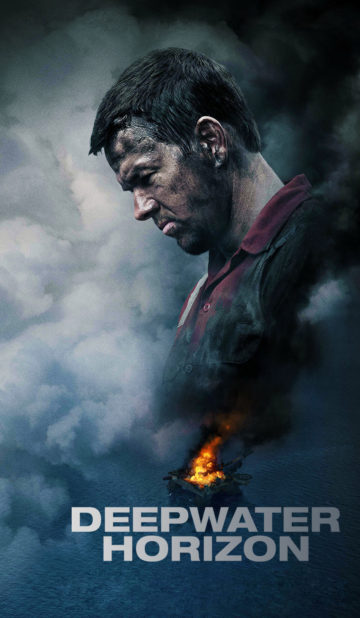 On April 20, 2010, the Deepwater Horizon drilling rig explodes in the Gulf of Mexico, igniting a massive fireball that kills several crew members. Chief electronics technician Mike Williams (Mark Wahlberg) and his colleagues find themselves fighting for survival as the heat and the flames become stifling and overwhelming. Banding together, the co-workers must use their wits to make it out alive amid all the chaos.

Peter Berg and Mark Wahlberg collaborate for a second time following the success of 2014’s Lone Survivor to bring us yet another shocking true story about the worst oil spill in American history. I have read other reviews following the film’s release about the factual accuracy regarding the events leading up to the disaster, however real-life survivor and Chief Electronics Technician Mike Williams (who Wahlberg portrays) was a consultant for the movie and would openly correct the film makers on facts and technical jargon. Of course, with any Hollywood film some changes would have been made for a story telling standpoint but Deepwater Horizon for the most part is a clear depiction on the horrifying incident.

Deepwater Horizon succeeds at paying tribute to all 11 crew members who lost their lives on the rig, seeing their names and photos before the credits roll was respectful. The ensemble cast in Deepwater Horizon was incredible and clearly showed empathy for their roles. Kurt Russell reminds us why he’s one of the biggest stars in the world and some powerful scenes between him and John Malkovich are achieved by only a stare. The rest of the cast do a terrific job, Mark Wahlberg and Kate Hudson share great chemistry on screen and Dylan O’Brien who I believe is an underrated actor preforms well amongst the veteran cast. And finally, we get to see real life farther and daughter Kurt Russell and Kate Hudson share a scene together for the first time, it’s brief but packs an emotional punch when families are being reunited together, let’s hopes they can work together again in the future.

According to the cast and crew, the film set was one of the biggest practical sets ever made and was an 85% scale replica of the real rig. I thought that the use of practical and digital effects truly added a sense of realism to the movie. One of Deepwater Horizons biggest accomplishments is the slow-paced build up to the blowout which is extremely tense, but it allows time for that all important character development and showing the audience how the explosion happened.

Peter Berg perfectly merges intensity and emotion in this film and I found myself hooked to the movie from the get-go. Once the explosion takes place there is a sense of dread that does not let go until the final moments of the movie and I urge everyone to watch Deepwater Horizon on Blu Ray or 4K to receive the full experience of the film. It’s a compelling story and an event that will still be discussed in years to come. Everyone who worked on the film wanted it to look and feel as real as possible and I believe they succeeded.

There is only 1 minor flaw that I picked up on when re-watching this movie and that is the fact that sometimes it’s difficult to hear the dialogue over helicopter rotors, the explosions or clunking metal, however this is never distracting as you’re too engrossed in the story. I’ve seen a few complaints about ‘over the top action’ but from doing my own research I have learnt that Mike Williams did in fact jump 10 stories off the rig and was one of the last crew members to escape, so if you’re worried about fabricated details and Deepwater Horizon feeling like any other generic action movie, there is nothing to be concerned about.

Deepwater Horizon has strong characters, a gripping story, great visuals and incredible attention to detail that is all based on a true historical event. Peter Berg and everyone involved have created a ‘must watch’ film that will be used to learn the story of what happened in the Gulf of Mexico back in April 2010.