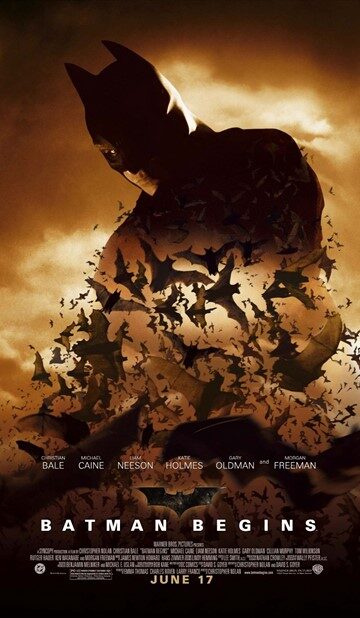 After training with his mentor, Batman begins his fight to free crime-ridden Gotham City from corruption.

At a time when Batman’s movie reputation was at an all-time low following the abysmal reception to Joel Schumacher’s cringe-worthy Batman & Robin in 1997, movie and comic book fans around the world could not have foreseen the beloved character being pulled from the rumble into an adrenaline filled, pulse racing, action packed cinema experience.  Enter Christopher Nolen, who resurrected the franchise and who is the real superhero of this story.

Batman Begins leans into the characters dark tone and explores the motivations and origins of Gotham’s Caped Crusader. These moments in Batman’s crime fighting career had never been fleshed out on the big screen and yet, they are such an integral part to his story and persona. If I had to nit-pick a moment that I disliked, I would say when Thomas Wayne is shot, his death lacked any sense of pain and he seemed to pass with ease, however this does not dampen the quality of the movie.

The cinematography and set designs in this movie are stunning and Cinematographer Wally Pfister, who has worked with Nolen on most of his movies, did an incredible job at showing the vast and harsh landscape of the Himalayan mountains and Gotham City’s skyline. Wayne Manor and the bat-cave felt stripped from the comic pages and the research and development division at Wayne Enterprises is full of gadgets which will please any Batman Fan.

Another aspect which makes Batman Begins stand apart from any of its predecessors is the realism. His suit, gadgets, and vehicles are all based on real-life military technology and this truly immerses you into this world. The Batmobile also known as The Tumbler, although not the usual slick design we are accustomed to, is an absolute force to be reckoned with and is used in an exhilarating car chase.

The supporting roles in Batman Begins are perfect, Sir Michael Caine and Morgan Freeman portray a sense of loyalty and allegiance to Bruce Wayne whilst also offering the best light-hearted and humorous moments. Versatile actor Gary Oldman plays Sergeant Jim Gordan, Batman’s unspoken ally and Liam Nesson plays Ducard, Batman’s mentor in the League of Shadows. The entire cast-list was outstanding, and I could not imagine anyone else in their roles.

What makes Batman Begins superior to other movies in the Superhero genre, is you become as interested in the man behind the mask, as much as his alter-ego. This was achieved by Nolen’s marvellous storytelling and Christian Bale’s portrayal of Bruce Wayne. Nolan and Bale successfully show the characters multiple personalities which include Batman’s aggressive nature to use fear against the criminals, and the 2 sides to Bruce Wayne, the irresponsible billionaire and also his true self.

Without jumping into spoiler territory, Batman Begins utilizes villains that to my knowledge had not yet been used in live-action adaptations. Cillian Murphy plays Jonathan Crane a.k.a. Scarecrow who is a fan-favourite from the comics and the animated show. Some people may feel that Scarecrow was under-used, but fear-not, he is relevant to the story and uses his toxin to terrorise the citizens of Gotham.

Needless to say, there is a reason why fans and critics praise these movies as being the greatest Superhero trilogy ever made.  Warner Bros. and Christopher Nolen bring a new story and new style to the Dark Knight and the ending will leave you eager to watch the next instalment.