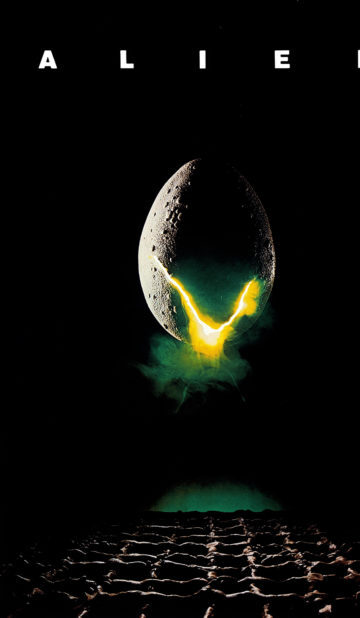 In deep space, the crew of the commercial starship Nostromo is awakened from their cryo-sleep capsules halfway through their journey home to investigate a distress call from an alien vessel. The terror begins when the crew encounters a nest of eggs inside the alien ship. An organism from inside an egg leaps out and attaches itself to one of the crew, causing him to fall into a coma.

It’s been 42 years since the release of this sci-fi horror masterpiece and even today, it remains a nail biting, nerve shredding and claustrophobic viewing experience! What makes this movie stand out from all of its subsequent sequels and spin-offs is its small scale locations and story.  Now, some could argue that its small scale was due to the budget restraints and technology available in 1979 but I believe this goes in the movies favour because it adds more tension knowing the Xenomorph could be hiding in plain sight and you just can’t see it until it’s to late!

Legendary filmmaker Ridley Scott created in my opinion the greatest horror movie set in space, other movies in this genre such as ‘Event Horizon’ or even more recent movies such as ‘Life’, although good movies in their own right, have tried to recapture that feeling of terror but could not live up to Alien.  The story is easy to follow, the crew of a spacecraft, Nostromo, intercept a distress signal from a planet and set out to investigate it.  Crew member Kane played by the brilliant John Hurt is attacked by an alien, attaching itself to Hurt’s face which later leads to the creation of one of the greatest movie monsters in cinematic history.

The crew members now have to fight for their survival whilst they attempt to hunt and kill the alien lifeform.  You can feel the chemistry from the entire cast and they really make you believe these individuals have been on a long voyage together, they feel like a dysfunctional family, they argue, they disagree with each other but when they start to lose members of the crew, you feel their loss.  This is most noticeable in the infamous chest burst scene as besides John Hurt, the cast did not know they were about to be sprayed with blood and you can see the real shock on their faces as they watch this grisly death.

The design for the Xenomorph and face hugger based on the artwork from Swiss Artist H. R. Giger is the true stuff of nightmares, the Alien is the “perfect organism” and its acid blood makes it extremely difficult to kill.  The Nostromo ship design and planet design of LV-426 are cleverly crafted and feel outer worldly. My favourite aspect of the movie and where I feel future instalments fail is how the sets/locations feel confined through the rock crevices on the planet or the narrow hallways of the ship, this creates a constant sense of danger.

Sigourney Weaver obviously gets a special mention playing Lieutenant First Class Ellen Ripley.  She is shown as one of the smartest crew members, she has a strong moral compass and by the end of the movie earns her status as the bad-ass heroine we know her as.  An interesting fact is the role of Ripley was originally written for a man but thankfully Weaver was cast and birthed the first female action hero.

Alien still wears the crown of the best sci-fi horror movie ever made and honestly, I don’t believe it will ever be topped.  If you have not already seen Alien, I encourage you to sit down, switch the lights off and watch this great movie.  Remember, in space, no one can hear you scream, but they can in your living room!