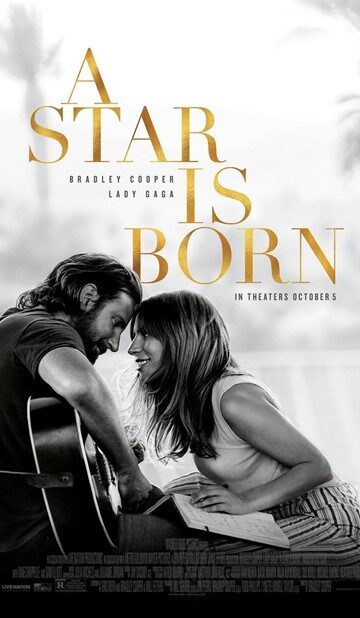 A Star is Born

A musician helps a young singer find fame as age and alcoholism send his own career into a downward spiral.

Bradley Coopers directional debut is sensational and following the universal praise for A Star is Born, we hope it’s not too long before Cooper is back behind the camera to show off more of his versatile skill set. After watching this movie, I was astounded to learn that this is the 4th remake of this story and clearly, it’s a story the audience cannot get enough of. I fully intend to watch the older versions, however as I cannot compare to what has come before, I will be basing my overall thoughts on this iteration only.

The narrative has many moving parts, and this is the movies greatest strength and only weakness. This is most noticeable in the final 30 minutes of the movie where there are plot points which I felt should have been explored more and there are time jumps that aren’t overly clear, in spite of that, the movie does not feel overstuffed.

A Star is Born begins with introducing Jackson Maine (Cooper), a famous Country Rock singer who suffers with a drug addiction and alcoholism and within the first few minutes of the movie you see how tormented this man truly is. Cooper draws from his own real-life experiences and delivers a very raw and emotional performance. Following her success on American Horror Story, Lady Gaga was an amazing choice to play Ally and a performer who is known for her upbeat pop music and flamboyant costumes, in the movie she is very natural and conveys a singer-songwriter who has pretty much given up on her dream to be a singer and is very self-conscious about her appearance.

The story includes Lady Gaga’s rise to fame, Bradley Coopers fall from fame, the alcoholism and an insight into the music industry, but in the centre of it all is a love story between the 2 main leads.  The chemistry between Cooper and Gaga are the foundations for the entire movie and in my opinion, they should have won the Oscars for Best Actress/Actor at the 2019 Academy Awards however, Lady Gaga did take home the award for best original song for “Shallow”.

The soundtrack to this movie is amazing with a wide variety of great tracks which I highly recommend downloading after watching the movie. Bradley Cooper underwent months of vocal training whilst also learning to play the piano and the guitar. I feel this training fully paid off as the opening scene is outstanding with Cooper signing live for a crowd of 80,000 people at a concert in Los Angeles, however this scene was filmed during the UK’s Glastonbury music festival.

A Star is Born is a very emotional movie throughout and there are certain scenes that got me quite choked up. I am a huge fan of actor Sam Elliot, who in the movie plays Coopers older brother and manager, Bobby. Due to Coopers alcoholism and drug addiction, Bobby ends up caring for his younger brother in a fatherly manner, and I felt this was due to their difficult upbringing which left Bobby feeling responsible for Jackson. As well as being full of mixed emotions, there are many heart-warming moments throughout the film and I found myself unable to move from my seat from start to finish.

For me, I found this film to be an exceptional romantic drama and also one of my favourites from 2018, with Cooper and Gaga being a modern-day Jack and Rose. The films end will leave you full of emotion and going back for a second viewing before you know it.