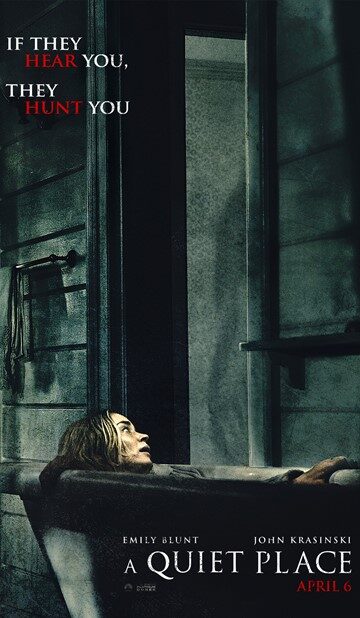 In a post-apocalyptic world, a family is forced to live in silence while hiding from monsters with ultra-sensitive hearing.

In an era where horror films are feeling very stagnant and many follow the formula of predictable horror tropes, A Quiet Place succeeds in creating an extremely tense atmospheric nail biting experience.  I was completely invested from the start. The film starts on day 89 in this post-apocalyptic world and what’s refreshing is A Quiet Place does not treat the audience like idiots, we are not shown the origins of the monsters merely the aftermath of their arrival. Not once throughout the run time did I think to myself ‘I wonder how all of this started?’. The scenes are perfectly crafted to give us all the information needed and establish the rules of survival whether that be on missing person posters, newspaper articles or writings on a white board and this allows our absolute focus to be with the characters and their story.

I have such high praise for John Krasinski and all that he accomplished with this film, his dedication is astounding being credited as co-writer, director, actor of father/husband ‘Lee Abbott’ and he even wore the motion capture suit to portray the monsters. Previously I had only seen him star in Michael Bay’s 13 Hours: The Secret Soldiers of Benghazi, however following A Quiet Place and landing the lead in Tom Clancy’s Jack Ryan TV series, I can see this as being the start of a much larger career.

Staring alongside his real wife Emily Blunt, their natural chemistry flawlessly translates onto the screen and I truly believe I am watching a family endure the terror and adapt to living in silence, throughout the movie we see family photos and these are actual photos of Krasinski and Blunts daughters which I thought was a nice touch.  Millicent Simmonds and Noah Jupe do a superb job in their respective roles, especially Simmonds who has appeared in 1 other film prior to this and an interesting fact is just like her character in A Quiet Place, Millicent Simmonds is also deaf in real life.

The use of sound or the lack of is a core feature in this movie and in some ways becomes a character in itself, going into the cinema I expected little to no dialogue and an over dependence on sub-titled sign language and I wondered whether this would be distracting and hard to follow.  I can confidently say that this is not the case and actually adds further tension and emotion to the story. In some scenes the subtitles couldn’t appear quick enough as I was so eager to know what they were signing to eachother. In early development stages there was plans to have no sub-titles at all, however after reviewing a complex scene between Krasinski and Simmonds this idea was scrapped.

The atmosphere in A Quiet Place is what really makes it stand apart from many other films in its genre, instead of relying on gore or over the top jump scares, it’s the tension that has you on the edge of your seat.  I am a huge fan of the horror genre but it’s a rarity for me to feel frightened. A Quiet Place achieved its goal by building the suspense and unease from the beginning and manages to hold that feeling to the very end. The monster design is also impressive and from what I can tell doesn’t seem to copy any elements from previous monster movies, the trailers were smart not to show the creature design and you only see glimpses for the first half of the movie which adds more tension and anticipation.

I have to give special mention to a particular sequence involving Emily Blunt, a nail and a bath tub.  Without going into spoiler territory as I urge everyone to watch A Quiet Place, this sequence is full of dread and suspense, my pulse quickened and I was holding my breath which is a reaction you would expect watching a horror movie.

Overall A Quiet Place is a fresh take on the less is more concept. Furthermore, A Quiet Place cleverly sets up sequels in a scene when Krasinski ignites a fire on top of a silo, we see other fires light up in the surrounding area which gets you thinking… who are they and what’s their story? With Krasinski, Scott Beck and Bryan Woods all returning to pen a screenplay for the next instalment, I actively wait on any details for what’s to follow.